The Acting Inspector General of Police (IGP) Dr George Akuffo Dampare on Sunday morning stormed Abesim, in the Bono Region, following the arrest of a 28-year-old man alleged to have murdered three boys.

The police arrested Richard Appiah, an architect who is believed to have murdered about three children and kept some meat suspected to be human in a fridge.

IGP commiserates with families of murdered boys in Abesim 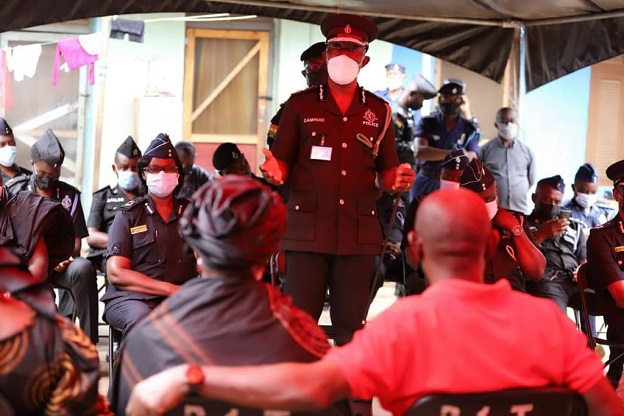 The Acting Inspector General of Police (IGP) Dr George Akuffo Dampare on Sunday morning stormed Abesim, in the Bono Region, following the arrest of a 28-year-old man alleged to have murdered three boys.

Appiah’s victims includes his own stepbrother, with the others being a 12-year-old and a 15-year-old. The bodies were found in Appiah’s rented two bedroom house at Alaska near Abesim on Friday, August 20, 2021.

Another suspect, whose identity has been withheld by the police, was later arrested to assist with investigations.

Visit
The Acting IGP, Dr Dampare, on Sunday morning visited the families of the victims following the traumatic discovery, and also paid a courtesy call on the Abesimhene and Dormaa Kyidomhene, Barima Nana Kumi Akyeaw.

Ahead of the visit, Dr Dampare dispatched a team of investigators from the Criminal Investigations Department (CID) Homicide Unit in Accra to take over the case.

A forensic pathologist team has also been assigned to move the remains of the victims which were found in the house of Appiah to the Police Hospital morgue for analysis to support the ongoing investigation of the case.

During interaction with the families, Dr Dampare announced that he had further directed professional clinical psychologists and counselors from the Counseling Department of the Ghana Police Service to offer free counselling services to the traumatised families, community members and police investigators who visited the crime scene and found the remains of the victims.

Government Of Ghana Completes The Take Over Of AirtelTigo

Government Of Ghana Completes The Take Over Of AirtelTigo

VIDEO: Serwaa Broni has reported me to Canada Police for Criminal...

VIDEO: If My Husband Is F00lish Enough To Cheat On Me...

Police hunts for a man who stabbed his wife after threatening...

“We keep dangerous criminals but we’re the most neglected security agency”...

I’m on ‘Fake’ Pastors because Religion is Impeding Progress in Ghana—...

Sekondi: Fetish priest rushed to the hospital over a broken heart